McDonald’s Plays the Border between Norway and Sweden

24 Feb 2014, Posted by nico@deed-muc.com in Uncategorized 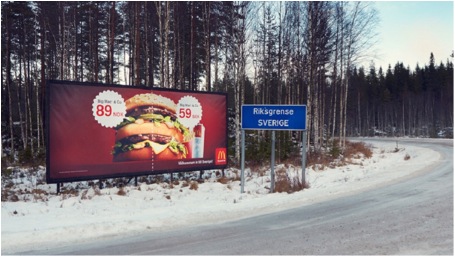 The Scandinavian countries are definitely known for their good standards; however, there are some differences between these countries, at least when it comes to food, tobacco and alcohol prices. Norway seems to be a more expensive country in comparison to Sweden, so many families have to cross the border in order to save some money.

McDonald’s saw this price comparison as a way to point out the low prices their restaurants have in Sweden. Agency DDB Stockholm came up with the idea to put a billboard on the border between these two countries, which indicates differences in pricing. The billboard is divided in two and each side of the billboard represents one country with its own price for the Big Mac. They’re actually highlighting the lower price of Big Mac in Sweden and tempting their neighbours with the message “We Swedes quite happily welcome our bargain-hunting neighbours, with open arms and a broad smile” in the web video.